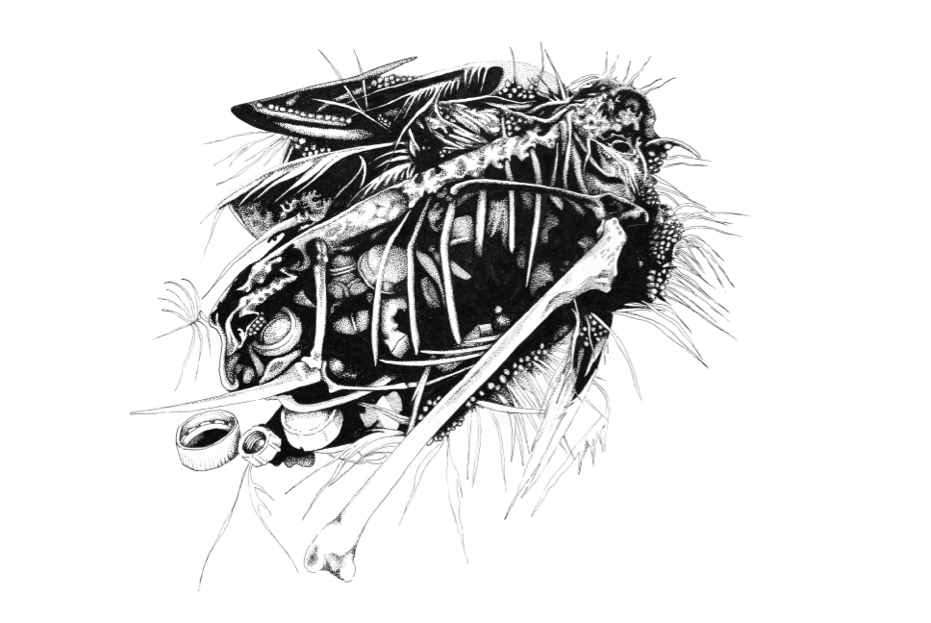 Bestiarium (Which later developed into the project The Beast in the eye of the cyclone) is a project about how animals, sea and nature are forced to adapt to humans. There are currently islands of plastic and rubbish in the sea, such as the Great Pacific Garbage Patch off the coast of California, where man-made materials are tightly compressed, dating from 1930s until today. Ocean currents allows the garbage from many continents to eventually end up in this strange vortex. How has nature adapted to this non-degradable material? What evolutionary changes have been noticed? How are we as a people able to bear these kilometer-long scars of our actions?

The project title is inspired by the medieval lists of fantastic creatures, which can be linked to the artistic work of envisioning an accelerated transformation of animal carcasses caused by plastics and other chemical emissions.

In collaboration with the Museum of Natural History, a gray seal that died of environmental toxins in the Baltic Sea was skinned and examined. The artwork suggests another way in which a seal could have evolved under current conditions.

The work is presented as large-scale ink drawings, performances and sculptures that show the collisions between nature and society. The works were presented in the exhibition Bestiarium – Work in Progress in 2014 at Gallery 69, Oslo, Norway.

Press about the project: